Yet Another Excuse To Wimp Out During Workout!

Wahoo for Saturday and Wahoo for the rain that made for a quick 30 minute swim workout this morning.  I haven't swam since Tuesday when I did my 1,225 (12/25) Christmas Workout.  Which by the way is now back from the black hole of Garmin Connect.  I noticed when syncing my watch this morning that the workout was now up.  Which is a good thing.  But I've been busy teaching spinning all week with 3 classes on Wednesday and 2 classes on Thursday.  Friday I don't teach but work early in the morning so I use that as my default recovery day.

I say recovery day but I think I told someone I'd go to a class next Friday at 5:45am.  Ugh, well see about that!  As for today's swim...

Lot's of numbers for a quick set.  I'm copy/paste from Garmin.

I was really just pushing my way in those 300's.  I'm really out of swim shape so by the last one I was feeling a bit sore and fatigued.  I really gotta snap out of my laziness when it comes to swimming.  I did a 50 easy and called it a day.  Then the storm hit and everyone had to get out anyways.

It's 39F degrees outside so you know what that means?  Swimsuit season has arrived!  Huh?  I get home from the pool and the first email in my box is from Neiman Marcus promoting the "New Swim Collections."  Oy!  As for my swim well it went a lot easier 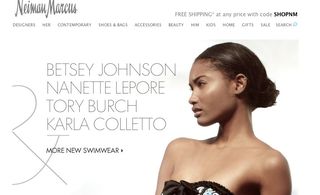 then I was expecting. After 4 Group Ride (Spinning) Classes yesterday in a row I thought my legs would be toast today. But I felt good.  Must have been the massage afterwards!

Nothing much to say about it.  It was what it was.  I really thought I was going to die when I heard the set but it went pretty easy as I was swimming.  I wasn't record breaking fast but I felt okay.  Getting ready for the 400 IM in Feb down in Clearwater.  Yeah, I'm going to finally bite the bullet and race the 400 IM.  I figure I'll be there for the 1000 free so why not attempt to drown in the 400 IM.  Workout Yardage - 2400 yards

December was just another month of sorta swimming.  Work kept me out of the pool that and some running.  Not that much running but some mornings I ran instead of swimming.  For the month of December I swam a total of 22,050 yards.  Not one of the biggest months of the year.

Compared to other months...

September I swam zip, nada, nothing

Where Is The Strength?

One more swim for 2010!  Got up and went swimming which the getting up part was a bit easier today.  After two mornings of 26F it was nice to wake up to 45F!  It was like waking up to summer.  Okay not that warm but better.  Actually after working two shifts to midnight in a row and getting up to swim yesterday morning all made up for a tough morning.  At least that is how I felt in the pool today.  Working at night means that I'm climbing up and down ladders and lifting things up and down.  Ugh!  I'm too old for that shit!  But without a gym membership I guess it's sorta cross training.  I miss my weight training and today I could tell in my swimming that my body misses the weight training also.  While swimming both the butterfly and the freestyle today I felt like I just wasn't getting enough power in the water.  It was a tough workout for me.  Plus it's the first time I swam 3 days in a row in months.  Hell it's the first time I swam 3 times in one week in a very long time.  I do plan on trying to swim tomorrow afternoon since I work at 7am tomorrow.  Now as for today's workout...

After that we were done for the most part.  I did a 200 pulling while breathing every 3.  So the total yardage was 2,450.  Then a few of us chatted a bit and that was it.  At least for today if not the year!

Damn I hate the cold!  Two mornings of record breaking cold is two too many!  I woke up bright and early to go swimming this morning and got to the pool before it even opened for a change.  Which wasn't so smart standing outside freezing my ass off.  Before I left I was debating on which swim suit to wear.  Since it was about 27F outside I was going to wear my full blueseventy nero comp suit but decided to wear my Finis leggings.  Only cuz' the leggings are easy to deal with for bathroom breaks.  Either way I figured they'd help with the cold temps.

I warmed up a 550 and boy did I love swimming in an old tech suit.  I so had forgotten the magical powers of the suits.  Being such a bad or lazy kicker wearing the leggings kept my legs up and not just flopping around as usual. We then did a 200 kick before doing 4x50's kick/swim.  So the full warm up was a 950.

Then everyone got out and I warmed down a 150 for a total of 2,600 yards.  I sorta wanted to do more but I was cold and lazy.  I'm going to try and swim two more times this year.  Since we only have two more days I'll be squeezing them in!  The good news is that the temps will be rising starting today.  Hopefully they'll stay in the 70's for the daytime highs.  These 27F mornings suck!

Finally a morning I can swim and it's the coldest morning on record in Central Florida.  26 F!  Holy Mother F'ker, that is cold!  I got to the pool about 6:50am and people were already in the pool swimming since it was too cold to hang out on deck.  I jumped in and did about a 400.  The first 100 I was so ready to get out and go home.  The water was warm but the air was freezing.  My body just couldn't handle it.  I was cold.  But I stuck it out and adapted.  Of course none of us could see the clock due to the steam pillowing out of the pool so the workout was on an interval but Gary set us off by his watch.  So I have no idea what our interval was.

I used the 50 pulls as recovery and did my strokes all butterfly!  Figured that I haven't been swimming so I needed to push myself!  (1400/2100)

Then everyone got out but I stayed and did 6x100's Pull.  I did them breath control by 100 any/3/5/7/9/any.  I was going to swim more but damn I was cold.  When I got out my kickboard, pull buoy and my flip flops had ice on them.  ICE?  I'm going to swim again tomorrow in the freezing temperature but I will wear a swim cap and maybe pull out my old B70 Nero to keep me warm!  2,700 SCY was my workout today!

Just A Tiny Bit Of A Swim

After working to midnight and not sleeping to after 1pm I somehow was able to wake up and go swimming this morning.  Of course the snooze button really got put to use before I finally crawled out of bed. Since I was running on little sleep and hadn't swam in a few days the warm up was very very slow.  Actually the whole short workout was pretty slow.

Then that was pretty much it.  The "coach" had to leave and I wasn't motivated enough to swim on my own.  So after chit  chatting with the other swimmers I pulled a 100 fre and got out.  So 1,900 SCY workout.  I'm debating on running or swimming on Christmas morning.  Guess I'll check the weather and decide on Saturday morning.

It was raining this morning so no running.  Knowing that sprinkles were in the forecast I planned to sleep in this moring.  Which luckily I sorta did.  Slept to a little after 9am.  Had a quick breakfast and then waited for the noon time lap swim.  I knew I wouldn't be swimming a hard long workout but really had nothing planned out.  Started off with an easy 600 warm up made up of 200 swiim/pull/kick.

Then rested and chatted to someone walking by the pool area.  Swam a 50 easy and then did 3 rounds of ab work in the water - 20 sec side to side, 20 sec front to back and 20 secs rest.  So 1,650 yards.  Not too much but enough.  I gotta work to midnight tonight and then be back at 7am.  Ugh!  I'm off on Monday so my long run will be then and possibly an afternoon swim after.

Well at least I got in a short workout which is better then no workout.  This morning I set my alarm for an hour earlier than I needed.  Doh!  What was I thinking?  Actually I was thinking the pool opened at 6am but it opens at 7am.  So I got an extra hour of just laying around and playing Cityville on Facebook.  Oy!

Then it was time to go swim.  Workout was okay for what it was.

It's a fact, I'm getting slower and slower. It's all my fault since I can't get motivated to swim as much as I did a few months ago. Today was my first swim in a week. I can sit here and blame my crappy job that has me in at 6am, 7am, 8am or have me work to midnight but really it just boils down to me.  I'm unmotivated.  I will blame it somewhat on the cold weather.  It's hard to be motivated to hit the pool at 7am when it's below 30 F outside and it's an outdoor pool.  After working today from 7am to 3pm I decided to hit the pool.  By the time I got home and got myself together I was in the pool at 4:15ish.  I didn't swim too long since I was unmotivated and really tired.  Standing on my feet all day is also killing me!  Ugh!  Anways, enough complaining and on to the workout:

The warmup itself was a killer for me.  My calves were sore from standing and my arms hurt from not doing anything at all.  I'm getting fat and lazy!  Ugh!

Swam a 50 to relax / warm down.  So the workout was only 2,250 yards.  But it's my first swim in a week.  Better something then nothing.  I'll be back in the water tomorrow.  Hopefully in the morning but I may sleep in as it's my day off.  Either way I need to swim and get in a run.  At this rate I'll be a contestant on The Biggest Loser by Season 13.