The Rearview Mirror - Swimtober is over!

Another month and more swimming.  Swimtober or October is now over and with no swimming today due to rain I have finished up the month swimming 37,550 yards this month.  This doesn't count that itty bitty open water swimming thing.

Past Months To Compare -

30 Minutes To Save The World Freestyle Workout.

Whatever I got "4 Minutes" stuck in my head.  So it's Sunday and since I gotta work I really didn't have much time to swim.  So I got up early and headed to the pool.  I do this for two reasons - 1.  I'm so not a morning person and need to workout to wake up or otherwise be a walking zombie and 2.  I need to swim more and faster.  Sunday I'm on my own since everyone else sleeps in so I can make my own workout.  Or at least steal a workout to swim.  This morning's grand larceny of swimming came from EE Workouts' "Quick Death... Happy Halloween"  Well at least the genesis of the workout.  Here is the workout they posted a 4300 yard workout -

Well not me I was a judge!  But, Boy do I make a sad looking Aquaman!  Later I'll have to upload a picture of me as Aquaman and Luwdig "Willy" as a shark.  Before the 10pm Halloween Parade and Swim Relay I did my own little swim.  I wasn't really feeling up to it this morning but I did swim.

That was it.  An easy day at the pool.   I went home ate a good breakfast and showered.  Then put on my sad excuse of an Aquaman costume and headed back to the pool to judge.  I snapped a few photos with my phone.

As you can tell everyone had fun.  I loved the Swimoutlet.com costume with one person being "A Plug for SwimOutlet" and the other being a "Swim Outlet" as in power outlet.  They had to be able to swim 50 yards in the costume!  You can see the pictures better in my gallery on Facebook.

Octoberfest - On The Road To Recovery...

Okay maybe not great but much much better.  I took Thursday off from swimming and slept all the way in till 8am.  Then after putzing around in the morning I was off to the gym.  Once at the gym I decided to go for a short run to warm up.  I ran just the 2 mile loop around the gym.  As I was almost done with my run a big giant Beer Stein drove by me.  Seriously! 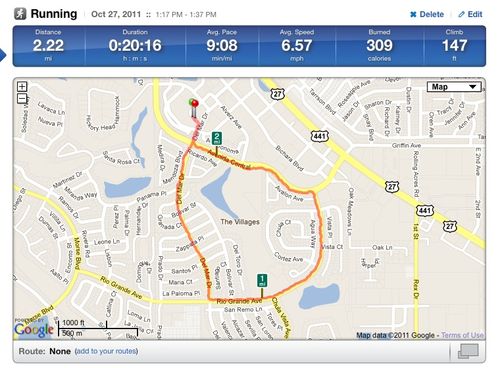 When I was done with my run it was gym time for some weights.  Worked on chest and arms.  When I checked my phone Runkeeper sent me an email about my run. 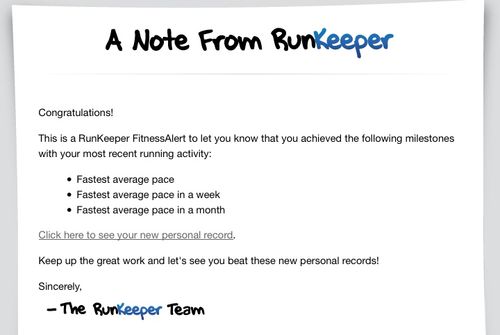 At least it's a record for my very few Runkeeper runs.  This morning it was "Up And Atom" to go swimming.  My back felt a bit stiff when I woke up but I still headed to the pool.  I figured I'd just go slow.  But I was feeling pretty good and pushed myself for the 300's and 100's.  Not blazing fast but still not bad considering this week has been a bad week.  I didn't even start to do any flip turns to the 6th 50.  Was saving my back.  Now we were to kick 3x100's but I wasn't using fins and was so slow basically I kicked a 250 with no rest and stopped. 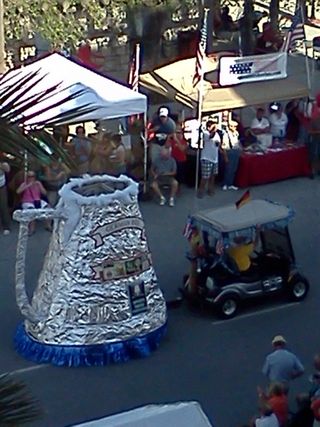 It was Octoberfest!  Today it's some gym time.  Just going to take Group Power but take it easy on the back.  No need to kill myself.

Maybe it's because it's a week before Halloween, or the fact that the pool is Leesburg doesn't have any lights in it so it's dark while swimming.  Well that and we only removed part of the pool covers so the deep end right next to my line was still covered.  I kept thinking that a gator from the lake would be under the covers.  It was creepy swimming next to this pitch dark pool of water.  Guess I shouldn't have watched Halloween last night.  Then again "This is Halloween" has always been a favorite of mine only to be spoofed this year in Gaga-fashion.

Hmm...maybe I should be Gaga as a mermaid for Halloween?

My back is better then it was yesterday but feeling just a small tweak.  I'm going to take it easy for the rest of today.  No gym time again.  Yesterday I fought the temptation to workout.  It's hard but I know I'll heal faster if I lay off working out.  Think I'll just sit on the couch with the dog and watch scary Halloween films all day long.  Maybe something about crocs or sea creatures.

Ouchie! The Problems Of Getting Old and The Pain That Goes With Them!

Last night I went to Boot Camp then Group Ride (Spinning.)  For Boot Camp I was doing okay but twisted my back the wrong way.  At first I thought it was no big deal.  Even with Group Ride right after I figured it was just a bad twist and it would go away.  Well this morning I woke up and boy I could hardly move.  I really twisted my lower back really good.  Getting dressed to go swimming was a challenge.  Once at the pool I was okay.  But getting dressed after swimming was a pain.  Wish I could spend the whole day in water.

A very slow 600 warm up.  Talk about slow motion.  I felt okay in the water but flip turns were so not happening.

And that was it.  I had to get out.  Like I said the swimming wasn't so bad but getting dressed and driving home was a killer.  Wish I could call in sick and just stay in bed today.

Yawn!  I so didn't want to get out of bed yet again.  These chilly mornings are making me super lazy.  But I did get out of bed and headed to the pool.   We had a bit of a late start this morning since the person opening the pool is one of the by the book types so we all had to wait while she checked us all in.  Whatever...

Last night I went to bed early with the intentions of running an easy 3 miles before heading to the pool but when the alarm went off at 5am I hit snooze.   Then hit snooze again and again till it was after 6am.  So no running today.  Grrr...I'm getting lazy.  Since I got to be at work at 9:30am I decided to do a quick workout.  Even after years of waking up early for working out I am so not a morning person.  In order for me to be awake and somewhat happy for work I need to workout before hand.  So I was at the pool at 6:45.  Luckily they had just opened the pool.  By the time I got my lane, the clock set up and my gear on deck it was about 6:50.  Now before I had left I quickly looked up old workouts from October 2008 via the Tardis (okay not really but I did use my blog.)  As I was looking at the workouts I had to skip down most of them just cuz' the intervals were way to fast for me.  I couldn't believe how slow I am now.  F!

So a somewhat quick and easy workout of 1,650 yards.  After my shift I'll do a weight training workout.  I'll be working so no Group Kick (kickboxing) for me today.

When Did 50F Become Freezing?

Summer is over.  Fall is over.  The Winter Tundra Ice is apon us!  Maybe for you midwestern folks 50F is summer but for me it's winter.  This morning I bundled up in my swim parka, put on my gloves and headed to the pool.  Brrrrr.....

At this point I knew I was stiff.  My shoulders and arms just didn't want to move.  It was too damn cold.  My butterfly was sad almost remedial butterfly.  I just couln't get my arms out of the water.  My shoulders wanted to stay under the water and never feel the cold cold air.

And that was it.  It was almost too cold to chat after the swim.  It was hop out of the water and run to the heated locker room.  I hate winter!  After work today I'm heading to Target to buy a knit cap and some warmup pants.  Do they make battery operated heated pants?

I Ran, I Ran Not So Far. Couldn't Get Past Lazy.

Okay so I'm butchering a great 80's classic.  But I did go on a run yesterday.  My goal yesterday was to wake up at 5am and go running before swimming.  Now I did wake up at 5am but it was pouring outside.  So I turned off the alarm and slept in.  Little did I know at the time that the rain would stop by 6am.  Oh well.  So I didn't swim in the morning.  The rain did stop and the sun sorta came out and then it rained some more.  But of course it didn't start raining again till I was out on my run later in the day. 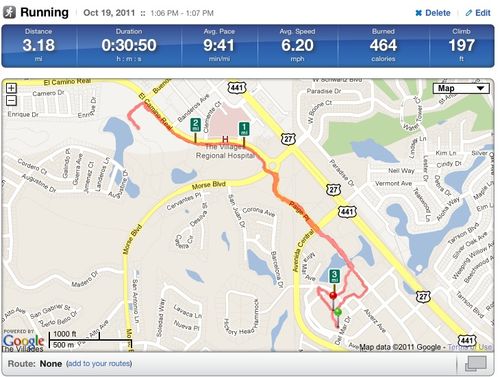 I dropped my stuff at the gym and hit the bricks as they say.  Well part of the run is on a cobblestone path so I can say bricks.  As you can see on my Runkeeper map above I ran to a point well a dead end and headed back.  I thought a street cut back but it turned out to be a dead end into a parking lot.  Oh well.  It was raining a bit at this point so I just ran back to the gym. 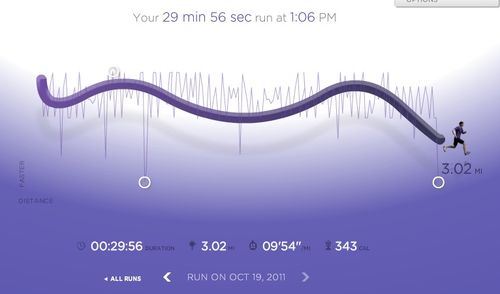 The difference between Runkeeper's GPS report on my Android phone and the Nike+ Sportband without GPS isn't all that much.  Now why do I use both then?  Well cuz' I like charts and graphs.  USA Today you had me at little colored infographics!  I have some friends on Nike+ and some on Runkeeper.  Then on top of that I also use DailyMile and now Fitocracy.  DailyMile I can input or sync my Nike+ runs or if I had a Garmin I could import those runs.  While Fitocracy I can only sync Runkeeper.  At some point I'll hafta decide on one or another.  Note noone uses the Adidas miCoach app or device so that has falled off my radar and my phone.  Which is a same cuz' Adidas miCoach isn't so bad.  I'm rambling on about all this because for the holiday's I'm hoping to get a new training device.  And I'm a bit confused and overwelmed by all the choices.  My options right now are the sorta new Nike+ GPS Tom Tom Watch, Garmin Forerunner 910XT or the new Motorola MotoACTV.  Then on the other hand I can just continue using my Nike+ Sportband without GPS so I can continue on with Nike+ and Dailymile but for swimming but the FINIS Swimsense watch which can be synced with Runkeeper.  Too many choices!

Anyways, the point is that I did run yesterday.  And I ran with my new sneakers!  I now am running with Zoot Advantage 3.0's.  After my run I was back at the gym doing weight training focusing on arms and chest.

This morning it was swim time.  And boy was it chilly outside.  I heard reports that it was 48F while I see now that it is 50F.  Cool air but warm water with a pool temp of 83F.  Ugh.  Hate that!

I then warmed down a 100 and called it a day.  Total workout 2,500 yards.  Would be interesting to see the swim in infographics via Swimsense.